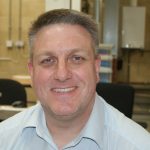 Derek joined the gas industry from school in 1977 and completed a three year apprenticeship with British Gas Southern Eastern region.  He went on to become  a service/installation engineer for the company working from the Sydenham depot.

Derek has also worked for Saglio Combustion from 1996 – 2000 as a heating engineer, before going back  to British Gas as a service engineer.  He became  a Training Officer for British Gas 2002 and has been in the training environment every since, and also working in some renewable technologies at Sevenoaks Energy Academy.